Some probabilities for monday 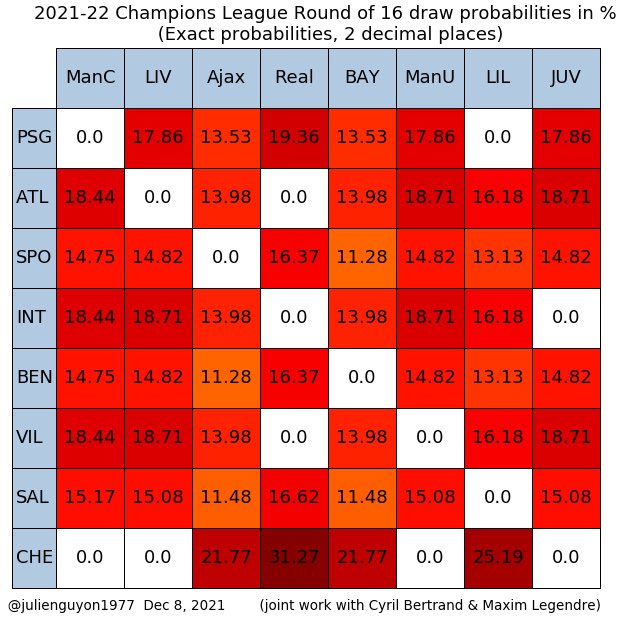 For Europe League & Conference, it's more a "playoffs" round than the real "round of 16".
Top

surfer wrote: ↑
Tue Nov 30, 2021 10:15 pm
This might now be a dialogue Lutz between you and I, with Antoine popping in now and again. Havent seen DA in a while and if Serbia's last minute winner to secure their place in Qatar isnt enough to get him to log in, then I dont know if he'll be back. The playoffs look exciting and I like that one of the last two European Champions will miss out on the WC. Probably Italy who seem to have lost their ability to put the ball in the net. I think Portugal are going through. The other two brackets I have no clue, they look extremely evenly balanced. Croatia got through on a 80th minute OG by a Russian defender in the pouring waterlogged barely playable pitch in Split. Croatia deserved the win but I'm not sure the match should have been played in the second half given the standing water and drainage of Pojud stadium.

hey guys sorry for dropping out. it's not only the predictor and forum that i have dropped out but more or less my life until i quit my current job.

but, yes surf - that Portugal-Serbia game was such a breath of fresh air. plus it was some classic Serbia shit - we can't make it to the 24 team super-expanded, super-inclusive EUROs for like a quarter of the century where we end up below the likes of Scotland (2020), Albania (2016) and Estonia (2012) in the group stage but regularly qualify for the 13 slots WC directly in front of the likes of Spain, France and Portugal. classic stuff

congrats re serbia! commiserations re atalanta! so, tedesco is the new rats manager. hm. i don't have the best impression of him from his time at schalke (but then of course he was at schalke). another of the young supposedly very talented but completely unproven coaches. probably strong on tactics but short of charisma, which latter quality i fear might be needed after marsch. i expect this to go wrong, though if he has it in him i guess this could be his breakthrough gig.
http://tonotfallasleep.blogspot.com
Top

so if this is the new-look spurs we're in for a fun second half of the season
http://tonotfallasleep.blogspot.com
Top

Yeah what a match, lot of talking points. Its almost tempting to put aside the score and refereeing decisions and just talk about the play, because given a different set of calls, it couldve been anything from 4-1, to 2-4. Although Spurs won the xG by a lot. They played well and seemed to have a plan of attack, coordinated movement that's been lacking for years. Dele played "well" outside of two huge missed chances. Those late runs, finding himself in pockets of space, but its his touch that seems to have disappeared. Winks was fantastic, his tackle to blow up Naby Keita led directly to the first goal, and his progressive passing was excellent. Didnt miss Hojbjerg at all which is amazing. Sessegnon was great. Salah had no shots on goal, and wasnt a factor other than the handball for the second goal. Ndombele was good, they're trying to make him the next Moussa Dembele, and Tanguy is not as "press resistant" as Moussa was. He lost the ball in some key positions but overall played well and his pass for the first goal was excellent.

When Spurs could break Liverpool's midfield line, they were incredibly dangerous. Liverpool were playing a suicidally high line and acres of space for Son to run into. Kane looked better, the CBs were good - especially Davies who really thrives in the back 3. Royal is a work in progress.

Briefly: Kane should have seen red, Robertson correctly did, yes to the Winks penalty, No to the Dele penalty, and yes to the Liverpool penalty. And no handball on Salah due to change in handball rule, would have been ruled out last year.

Atalanta stunk up the Gewiss against Mourinho's side. I only watched about 30 minutes but Atalanta equalized in the 2nd, only to have it correctly ruled out for offside, and then Roma scored a few late on when Atalanta were pushing for the equalizer. Inter are setting a blistering pace and it doesnt seem like anyone will catch them. Atalanta drew today against Genoa so they have dropped down to fourth. I still think they have an outside shot at the title but its definitely harder now.

And Rayo Vallecano up to 4th in La Liga, ahead of Athleti, Barca, Valencia. Crazy story, although I have only watched their highlights, havent seen a full match yet. GREAT article on them here, highly recommended: https://www.theguardian.com/football/20 ... ur-la-liga
Top

since the footie is a bit boring right now, here's a cool painting by dutch artist jeanne bieruma oosting (especially loving the studs like broken teeth) 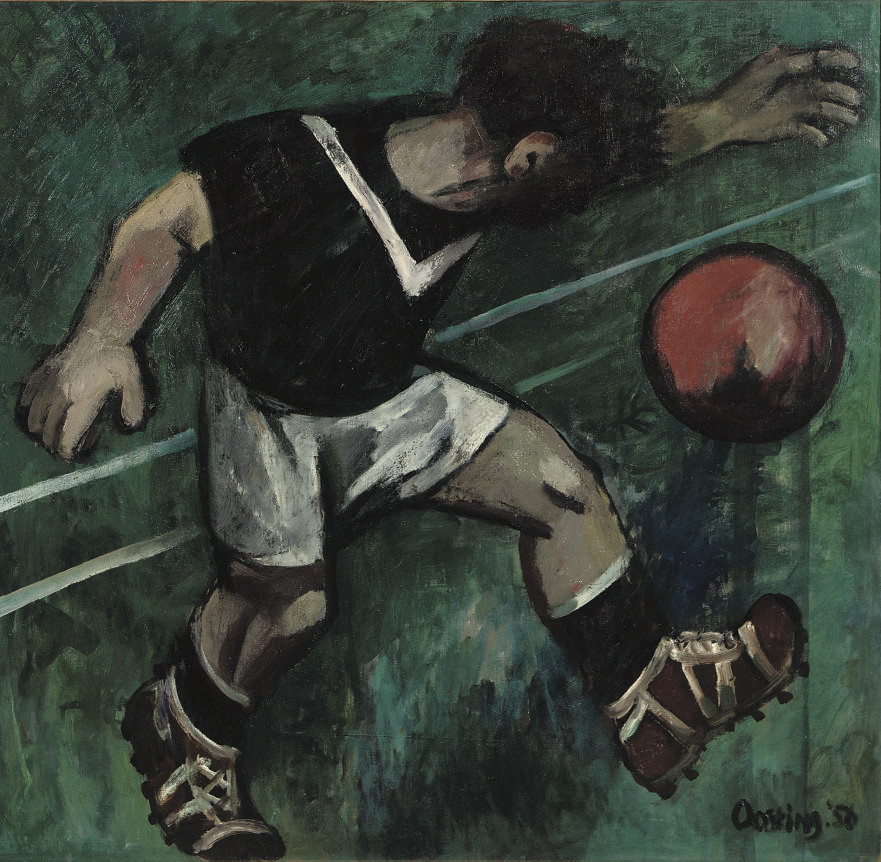 Bit boring eh?! Well Mini Moura Miracle to the rescue. The latest a team has ever been losing a match in the PL era, and then came back to win. 94:50, eclipsing Aguero in 2012 with City on the last match of the year. As James Richardson put it, "Bergwijn is Dutch for Big Win". Crazy because he arguably could have been sent off for shoving Soyuncu, who was later the last goal line defender Bergwijn had to beat to score the winning goal.

Signature win of the Conte era and certainly positions them well for the spring. 1 game off fourth with 3 games in hand. Makes the Chelsea game a freebee where we can hopefully go in and get a point.
Top
Post Reply
Jump to