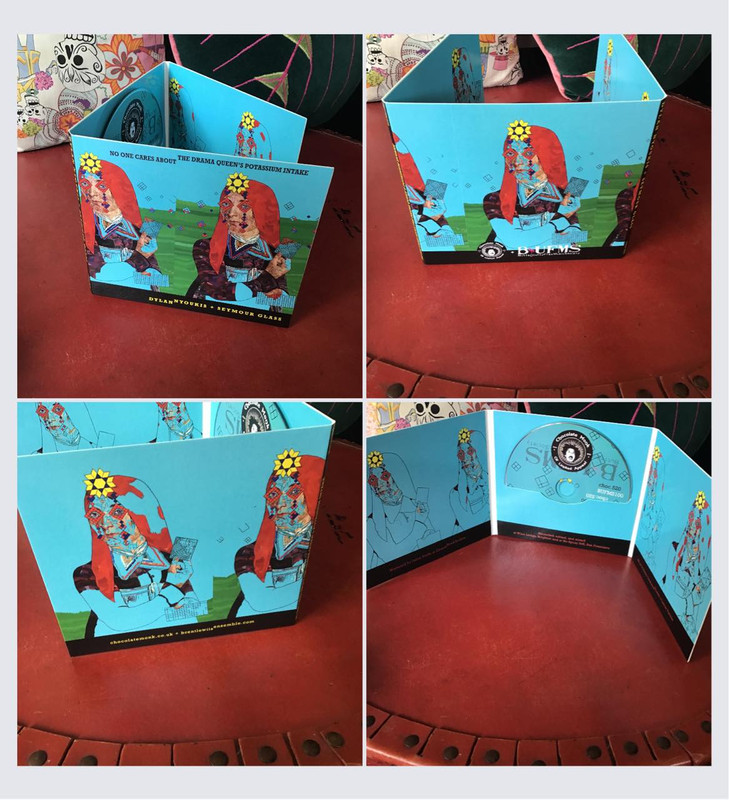 "Talk about truth in marketing! Do you care about the drama queen’s etc etc? I’ll bet you don’t! And yet, here’s a treatise by two of the world’s greatest song titlers (in case you’re writing this down, the complete list of Earth’s A+ song-titlers in no particular order: D.Nyoukis, S.Glass, Phil Todd, Campbell Kneale, Ron Mael) describing the statement’s self-evident truth. And maybe the end of summer is an appropriate enough time to start compiling an “albums-of-the-year” list, ‘cuz this bastard sure is on it. You know Dylan Nyoukis from his solo work, his part in the beast that is Blood Stereo and the man whose “taste” manifests as the catalogue of his Chocolate Monk label. Seymour Glass is an incomparable writer and is part of too many groups to list, but here are a few: Bren’t Lewiis Ensemble, Glands of External Secretion, Suppressive Persons… and I’ll stop there.
Upon first listen, “No One Cares…” an explosion of cartoon psychosis bursting feverishly in all directions. But evidence of its greatness comes with further explorations… for me, the revelation happened a few minutes into my third incursion. This thing left me stupefied (I know, I know… I was pretty stupid, to begin with, har har) and smiling like a goon. Upon continued engagement, “… Potassium…” revealed itself to be profound/masterful. But lemme back up. “… Intake” began life as a single-track half-hour CDR released last year on Chocolate Monk. Perhaps you’ve heard that version. It was good! It also did brisk enough business to warrant consideration for a second edition, and that’s the point at which a good album morphed into a great one. The initial 30-minute piece was transformed (with some scrambling and re-composing, addition and multiplication etc) into three 20-ish-minute pieces… or maybe a single hour-long cerebrum-scramble that’s cut into three sections for easier digestion. The result might be the apex of either artist’s work (so far), but then it’s still only August, so who knows.
As one can expect from Nyoukis’ output, there’s an intangible dream logic at work as one element blurs into the next and aspects become clear and/or recede and/or transform in delightfully surprising ways. At one moment, we’re deep inside a sentient alien esophagus attempting to give directions to lost tourists… the next, we’re surreptitiously eavesdropping on an argument about language at a corner market. The argument started before we arrived and continues after we’ve shifted into a different state of consciousness, so instead of resolution we get a passage of squeaky toys that become inside-piano chimes, then balloon animals chained to actual animals, then the interior monologue of porcelain hippopotami on a fire escape. What seems at first to be linear or episodic or random is revealed upon close listens to have careful structure, sonic depth and attenuated tension. Comic goof is given some air time (whoops, whoopie cushions, grotesque juxtapositions) but the yuks lead inexorably to overpowering three-dimensional heave and lurid gloop as tantalizingly familiar acoustic harrumph folds inside and through itself, inside becomes outside and outside becomes a dream. There’s a palpable space and openness, each sound seemingly tangible within the stew. Human voices interfere by singing, muttering, swallowing or confidently reciting evocative nonsense. A cavalier listener might reach out to grab hold of some big metal ladle or dip a toe into the cosmic gloop before its atoms disperse, and maybe it wasn’t really there at all. It’s a goddamn blast.
Here’s an example of what you’re in for. The second track starts with a too-much-information propulsion rush, but the initial assault shifts sideways to a beautiful distant muttered/muted/mutated conversation and implacably coming-into-focus electronic irritant. A quick shift to Partch-like plonk is backed by another voice in distress… mocked by persistent raspberry and inhuman chortling. Glass & Nyoukis are patient, letting a bizarre mood take hold and establish its own topography before shifting gears again to pots n’ pans n’ animal growl. “Drama Queen…” is a creation of breathtaking compositional dexterity with a confidently light touch. This is something I can (and have! And will continue to!) listen to close over and over. I’m sure I’ll discover new facets interacting beneath and between what I’ve noticed so far. Highest recommendation, folks." - Howard Stelzer, Vital Weekly