Jonathan Miller, Oh Whistle and I'll Come to You, 1968

Clive Davies raves about it in my B-movie bible, Spinegrinder, but, apart from some atmospheric footage of the East Anglian coast (reminded me of Grant Gee's documentary on Sebald), there's not much to get scared about in this brief adaptation of an M.R. James ghost story, with Michael Hordern as a bumbling eccentric professor mumbling into his morning grapefruit
http://www.paristransatlantic.com
REISSUED! Eric La Casa / Jean-Luc Guionnet / Dan Warburton METRO PRE SAINT GERVAIS
https://swarming.bandcamp.com/album/met ... nt-gervais
Top I was wondering if the English 41 years ago were as stupid and unappealing as they are now, and Leigh's razor-sharp depiction of a rain-sodden camping trip in Dorset, despite old Morris Minor cars and David Hamilton Radio One shows in the background (hands up who remembers him), is just as cringeworthy - but highly amusing - today at it was the last time I saw it, and I won't tell you when that was. Here's a fine little analysis: http://lightsinthedusk.blogspot.fr/2009 ... n-may.html
http://www.paristransatlantic.com
REISSUED! Eric La Casa / Jean-Luc Guionnet / Dan Warburton METRO PRE SAINT GERVAIS
https://swarming.bandcamp.com/album/met ... nt-gervais
Top It's always fascinating to watch French movies made between 1940 and the early 60s, to see what films that on the surface might seem wildly different - Clouzot's Le corbeau and Godard's Le Petit Soldat, for example - have in common deep down, namely that great unspoken ambiguity / guilt / sense of treachery regarding the dirty deeds done during the appalling Vichy years or the equally nasty Algerian War. I guess it's why the French loved noir so much - and why after the Americans they produced the best noirs of the period. And when you have an actor as extraordinary as Michel Simon playing the lead, here a tortured hard-drinking doctor who turns to crime, you're know you're in for a treat. Excellent film.
http://www.paristransatlantic.com
REISSUED! Eric La Casa / Jean-Luc Guionnet / Dan Warburton METRO PRE SAINT GERVAIS
https://swarming.bandcamp.com/album/met ... nt-gervais
Top

As one IMDb punter puts it, "lousy title but a really good movie" - I'm no fan of American spectator sports (or of any sport at all really come to think of it), and you'd have to pay me serious money to get me to go to a rodeo, but that didn't stop me enjoying this one just as much as I did Peckinpah's Junior Bronner. Mitchum's burned out rodeo rider Jeff McCloud is one of his finest performances, and the chemistry between him and Susan Hayward ("Men - I'd like to fry 'em in deep fat!") is great. The shower scene is a killer. Good solid melodrama - more drama than melo in fact - thoroughly enjoyable
http://www.paristransatlantic.com
REISSUED! Eric La Casa / Jean-Luc Guionnet / Dan Warburton METRO PRE SAINT GERVAIS
https://swarming.bandcamp.com/album/met ... nt-gervais
Top

This was really great, a 4 hour film about a theater director who sleeps with most of his actresses and the tensions that brew between his wife and him, also an actress in the play they are rehearsing. A must see for any Jacques Rivette enthusiast.
Top

CRAZY HEART (2009) Produced by T-Bone Burnette, with Jeff Bridges, Maggie Gyllenhaal, Colin Farrell, and Robert Duvall. Bridges and Gyllenhaal are excellent in the film, Bridges winning the best actor oscar for his portrayal of a former country music star reduced to playing "bowling alleys backed by hippy bands." The plot (supposedly based on Hank Thompson's life) is predictably alcoholic but well-told. The song, "The Weary Kind," won an oscar, for best song (it includes the title phrase in its lyrics); but for me the music was the weakest part of the film. I expected more.

I also expected the title to mean they might sing the great old tune Hank Williams did, so much better than anything in the film: https://www.youtube.com/watch?v=L_p-pWZxkkk

Still, the lead couple bring it off, a touching bittersweet chemistry.
Top

This one provoked what's usually referred to as a "frank exchange of opinions" here, as Marie appreciated it much more than I did. Sure, Monsieur Blier takes great pleasure in annoying his audience, and he and his characters openly admit it, but I suspect that behind deliberate shock tactics (polite party guests who blurt out things like "I'd like to eat your pussy") he wants us to consider the plot - successful businessman forsakes beautiful wife for frumpy secretary - more seriously. But I didn't see much reason for the sporadic vulgarity, and thought the editing was all over the place, mixing flashbacks and fast forwards confusingly (I am prepared to give the director the benefit of the doubt, but I'd need at least one more viewing to be sure), and the whole thing lacked pace. And even if our man Depardieu didn't appreciate the soundtrack (hence the ending line to the camera: « Il me chier votre Schubert, vous comprenez? CHIER!!! »), I did. More than the film.
http://www.paristransatlantic.com
REISSUED! Eric La Casa / Jean-Luc Guionnet / Dan Warburton METRO PRE SAINT GERVAIS
https://swarming.bandcamp.com/album/met ... nt-gervais
Top An Occurrence at Owl Creek Bridge (1962) -- Short, award-winning French film almost completely without dialogue based on gthe Ambrose Bierce story. Gripping, even when you know where it's going.

"Freedom of thought and speech without available means of gaining information and methods of sound analysis, are empty. Protection and security are meaningless until there is something positive worth protecting." E.W. Hall
Top

And there's a possible link between those last two posts!

(Sorry I don't crop up here often, but I lurk regularly... keep up the good work one and all!)
Top

Slowly working my way through the Brakhage archive. Still not sure what to make of this, arguably his most famous work. Found several points to agree with here https://thecinemaunderground.wordpress. ... -brakhage/

That's a great little essay, thanks for the link. I think it's as close to articulating my own feelings about Brakhage as anything I've read. I think it's also quite close to my personal definition of "what good art does" in general.
http://www.skjolbrot.org
Top

Pretty naff, as far as story and acting goes (Joseph Cotten included), but some stylish photography and cool sets, par for the course with Bava. But you could probably give it a miss
http://www.paristransatlantic.com
REISSUED! Eric La Casa / Jean-Luc Guionnet / Dan Warburton METRO PRE SAINT GERVAIS
https://swarming.bandcamp.com/album/met ... nt-gervais
Top

), but I have to admit his smarmy cynicism is just right for the sleazeball lawyer / drug dealer he plays here. There's a touch of Ferrara, crossed with Alan Rudolph, about this which I liked more than I thought I would. Then again, I'm always a sucker for people getting beaten to death in poolrooms.
http://www.paristransatlantic.com
REISSUED! Eric La Casa / Jean-Luc Guionnet / Dan Warburton METRO PRE SAINT GERVAIS
https://swarming.bandcamp.com/album/met ... nt-gervais
Top

If Lucien Coëdel hadn't met an untimely death at the age of 49 hanging out of a train window (ouch), the history of French cinema would, I think, have been markedly different: he's absolutely sensational here as the half-mad occult-obsessed bellringer snowbound in the French Alps. Easily as good as Gabin, or as diabolical as Paul Meurisse would later become. Shame the only copy of the film I can find looks like it too has been left out in a snowstorm for several months - this fine suspenseful thriller really deserves a smart restoration and DVD release. Paging Bertrand Tavernier!
http://www.paristransatlantic.com
REISSUED! Eric La Casa / Jean-Luc Guionnet / Dan Warburton METRO PRE SAINT GERVAIS
https://swarming.bandcamp.com/album/met ... nt-gervais
Top

), but I have to admit his smarmy cynicism is just right for the sleazeball lawyer / drug dealer he plays here. There's a touch of Ferrara, crossed with Alan Rudolph, about this which I liked more than I thought I would. Then again, I'm always a sucker for people getting beaten to death in poolrooms.

), but I have to admit his smarmy cynicism is just right for the sleazeball lawyer / drug dealer he plays here. There's a touch of Ferrara, crossed with Alan Rudolph, about this which I liked more than I thought I would. Then again, I'm always a sucker for people getting beaten to death in poolrooms. 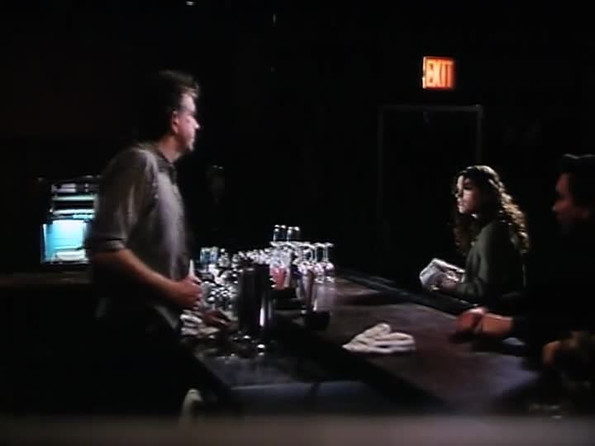 Screenshot's decidedly scuzzy (VHS rip all I could find), but the film's even scuzzier. As far as Jim Thompson adaptations go, this could be the most authentic (? ie - everyone in the movie is utterly detestable, like the characters in the novels) yet, but the acting is dire and the Evan Lurie music even worse. Shame - with a decent cast, money for sets and costumes and a good director it could have been as good as The Grifters
http://www.paristransatlantic.com
REISSUED! Eric La Casa / Jean-Luc Guionnet / Dan Warburton METRO PRE SAINT GERVAIS
https://swarming.bandcamp.com/album/met ... nt-gervais
Top

Might have been better as a TV series - the couple's decision to abandon their road trip (dig the Winnebago) and return tails-between-legs to the awful yuppie world they'd opted out of (until Julie Hagerty blows $100,000 on a Vegas roulette table in one night) leads to a somewhat perfunctory ending. Whatever happened to Albert Brooks? Last time I looked he doing voiceovers in Nemo and The Simpsons. Fun in places, but not as much fun as Real Life
http://www.paristransatlantic.com
REISSUED! Eric La Casa / Jean-Luc Guionnet / Dan Warburton METRO PRE SAINT GERVAIS
https://swarming.bandcamp.com/album/met ... nt-gervais
Top

Another one that needs some serious restoration. That said, not as wild or wacky as Simon of the Desert or Viridiana - but as it was very highly regarded by both Octavio Paz and Andrei Tarkovsky, I'd like to give it another go, if I can a copy that shows off the excellent photography to better advantage. Would make for a nice comparison with Bresson's Diary of a Country Priest, come to think of it
http://www.paristransatlantic.com
REISSUED! Eric La Casa / Jean-Luc Guionnet / Dan Warburton METRO PRE SAINT GERVAIS
https://swarming.bandcamp.com/album/met ... nt-gervais
Top

Following my own advice by way of homage to the late great Harry Dean, couldn't resist a return visit to this one. Really superb. But I said that last time (2012): "Roger Ebert once wrote that any film with either Harry Dean Stanton or M. Emmet Walsh in it had to be good - so this, with both of them, is double good. Actually, it's even better than that - have been on the lookout for it since reading Jesse's comments on it here a while back, and was delighted to see it's just come out as a Talents du Cinema mid-price Zone 2 DVD. Stanton, Walsh and Theresa Russell (another fine undersung actress) are all wonderful, but the film belongs to Hoffman (whom you could say Grosbard "discovered" when he cast him in A View From The Bridge at the Sheridan Theater in NY in 1965). Read on IMDb that there was some legal hassle about final cut, with Hoffman suing WB, but I'm wondering how much better it could be. The script is as raw and honest as a Raymond Carver short story - haven't read Eddie Bunker's book on which it's based (and on which Michael Mann also had a hand, I see) but I assume many of the lines came straight from there - and Grosbard's direction is precise and economical, never getting in the way of the disturbing moral dilemma we find ourselves as viewers: how far are we prepared to go in our sympathy for Max Dembo? At what point does hero turn into antihero and even villain?"
http://www.paristransatlantic.com
REISSUED! Eric La Casa / Jean-Luc Guionnet / Dan Warburton METRO PRE SAINT GERVAIS
https://swarming.bandcamp.com/album/met ... nt-gervais
Top
Post Reply
Jump to