by Alastair
Not quite Debbie does Dallas, but there you go.

My wife and I will be in New York from Monday June 28 through to very early Saturday Jul 3 as part of our trip back to the UK (we're doing it round-the-world style). Any gigs on? Would anyone like to put any gigs on that week, especially for me?

All recommendations for places to eat gratefully accepted. I've never quite got eating in NY right. It'll be Louise's first visit, so we'll be doing some of the more obvious tourist things but I'm looking forward to pointing out to her some of the more esoteric sights ("look - that's where Richard and I first met Letchhausen!" "this is the very restaurant where Sean Meehan took us for dumplings. Bhob Rainey sat where you're sitting!". And so on). We have a hotel booked, so that's all sorted.

And if anyone wants to say hello...

by RFKorp
You're just a little early. Gonna be some fun on July 10th coming together. But I'll definitely update you on anything that emerges of note in your visiting window!

by Jesse
Swing by Minneapolis, Alastair, I'll hook you up.

by Alastair
One day, Jesse. Afraid we're flying past you to SF for the weekend before heading over the Pacific for home.

by horaflora
How long will you be in SF? I'll keep an eye out for shows that Sat/Sun for ya, yah?

by Alastair
Yep, just Sat 3 and Sun 4 July nights in SF, fly out late Monday the 5th. Thanks!

(and if there's any good record shops I should go to, let me know)

by mudd
in SF?

aquarius and amoeba are excellent. in new york you could try other music and downtown music gallery.

as for food i'm not really an expert in either. in SF i've had a bunch of good food but i'm never sure where any place was.

in nyc i'm also pretty out of date as most of the last couple times i've been there i've only eaten in chinatown or new jersey. but hill country bbq is shockingly legit, and since you probably won't be swinging through central texas it would be an educational experience. the japanese food on 9th a block up from st. mark's place always made me happy. jon can recommend a thai place in queens that is phenomenal, too. but really there are a ton of new yorkers here, you should just ask for a particular cuisine or style and they should cough up all their information.

by jon abbey
yeah, tell me what you're looking for, mark mentioned the main two we take people to, hill country (central texas BBQ) and sripraphai (thai). there's also tons of really good burgers and neapolitan-style pizza here these days.

I don't have any shows on my own to-see list for that week as of now. issue project and the stone are the main two venues these days, also cool stuff pops up at fotofono, often on short notice. all of those places have listings on the web.

as for record stores, if you have time, you could be a rare in-house visitor to erstdist if you wanted. usually I have a $100 minimum if people want to come here (that includes free espresso and the keith rowe painting tour, although I think you did that once already), but I'll waive that for my old buddy alastair.

by bedouin
- get the metro and head to brooklyn bridge (manhattan side)
- take the long walk from there all the way to times square*
- eat at the Iguana mexican restaurant 240 west, 54th street

this walk will take 3+ hrs, but it's worth taking if you want to see New York.
You can plan the walk (pass soho, the chrysler building, or ground zero, or downtown music gallery, i think they moved to China town). It's also good to burn these calories before you get to the Iguana. (the margarita there is awesome)

If you don't like mexican go instead to the Carnegie Deli (http://www.carnegiedeli.com/home.php) for the ultimate in tourist folklore meat joint that does pastrami/corned beef sandwiches the size of your head. which you get to eat in mafioso-italian style new york setting.

next day, check amy ruth's southern cuisine in harlem.
Not for the diet conscious but that honey deep fried chicken is awesome.
http://www.amyruthsharlem.com/amymain.html

bedouin wrote:If you don't like mexican go instead to the Carnegie Deli (http://www.carnegiedeli.com/home.php) for the ultimate in tourist folklore meat joint that does pastrami/corned beef sandwiches the size of your head. which you get to eat in mafioso-italian style new york setting.]

not sure when you were here, but this place is dreadful now. Yuko and I went there last year when we were in midtown and she had a pastrami craving, and it was thoroughly disappointing. if you want this kind of thing, Katz's is the place.

by bedouin
yes that was a few years ago.
as a tourist attraction carnegie deli was interesting at midnight, but you are right the food was poor. i still remember i had "the woody allen"

which i never managed to finish. 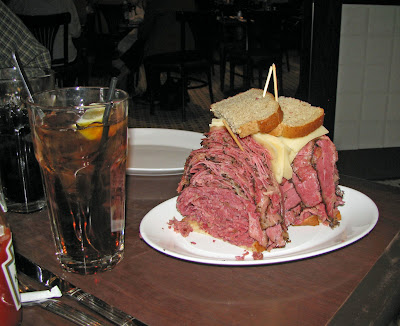 by mudd
that sandwich does kind of look like woody allen.

by Alastair
Thanks for the recs.

I did Katz's with Richard when we were over for Erstquake II and want to take Louise there. I'd read about Hill Country and was curious, so to get two recommendations for it means it's a lock-in. What's the best pizza place in Manhattan? I suppose we could be tempted to the outer boroughs for something really fine.

Other and DMG I know, although DMG has moved since I was last here (and I remember their pre-Bowery shop too). Thanks for the offer Jon, I'll PM you.

Bedouin, we will be doing something similar to your suggestion at least once. The best way to discover NY (like London) is to wander with a vague purpose and see what you find. Helps to make connections between the areas, too. We like Mexican and haven't had any decent stuff for ages (the ones here are dreadful) so I'll keep Iguana's in mind.

Any specific Japanese recommendations, not too expensive? We might need something healthy after all that meat and lard.

Is the SF Amoeba as big as the LA one? They had to send search teams in after me in that one.

by mudd
it's a little smaller, but there's another one in berkely. just in case.

and i don't mean to put a damper on bedouin's recommendation, but if you're gonna be in SF don't have mexican in new york. it's cheaper and fresher on the left coast, and the quality of mexican food is 100% freshness.

i'm afraid i can't remember the japanese place i went to in manhattan, i know there's some great stuff over in jersey but that probably isn't within your plans. nyc guys, is that place on 9th street still any good? we went there for quake 2 and it was good.

by jon abbey
yeah, it depends what kind of Japanese you want, sushi, soba, ramen, etc. places tend to specialize.

the place Mark means is I think Soba-Ya, still reasonably reliable for a Tokyo-esque soba experience (albeit double the portion size). the best ramen place is Ippudo, also in the East Village, but really crowded unless you go at an off hour.

my pick for pizza right now in Manhattan would be Keste, a tiny Neapolitan-style place on Bleecker. again, mobbed unless you go at an off time. and there's a place called The Little Owl in the West Village that the Guardian named 'the best burger in the world' last fall which I can corroborate is fantastic: